Do All Roads Lead To Heaven? 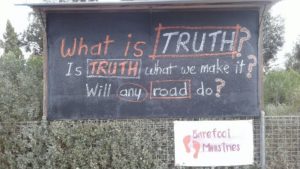 There seem to be so many “pathways to God” out there. Everyone has an opinion and it seems we are no longer allowed to dispute someone else’s version of how the world fits together because that might cause offence….and heaven forbid if we should offend someone!

There’s plenty of different religions to choose from, including atheism which would like to say its not a religion, but it is based on a level of faith – faith that there is no God. Then within in each “Religion” you have a wide variety of interpretations to choose from.

My dictionary tells me if something is true it is accurate, it is exact, it is in accordance with reality, it is not false. Why then does it seem that we have to accept everyone’s interpretation of God, belief in Heaven and what qualifies us to get there? If we are going to accept every view we might as well  say its just a fairy tale, so whatever story makes you feel nice, just delude yourself with that one.

But there has to be TRUTH!

For example, Hinduism says we are reincarnated after death, Christianity says we go to heaven or hell. Islam says God has no Son, Christianity says Jesus is the Son of God. These things contradict each other therefore cannot all be true at the same time.

Here are just a few things that set Christianity apart from other religions. I believe it is the ONLY WAY to God.

666 books written over 1500 years by 40 different authors with no contradictions. Historians agree that its replication and translation over the centuries is 99.99% precise.

All 330 specific prophecies about the Jewish Messiah were fulfilled in the person of Jesus, centuries after they were written.

God knew we would rebel against him and want to do things our way, which does not make for harmonious relationship between God and man, in fact it means we cannot be in His presence so our final destination is Hell! Go does not want this for any of us so He sent Jesus to take our punishment and make a way for us to become friends with God. Every other religion demands good works and human effort to avoid punishment, but God has done it for us! BUT WE MUST CHOOSE TO BELIEVE & FOLLOW!!!

The resurrection of Jesus is verified by eye-witnesses who believed it enough to die for it. No other religious founder has proved their power over death. We can have confidence in what Jesus tells us about death, heaven & hell.

Many other faiths say there are many paths, but Jesus said “I am the Way the Truth & the Life. No one comes to the Father except through me.” If that’s what God says well, we better listen. If He’s the maker & we are the creation then we can’t make the rules, He does!

By far the most wonderful truth of Christianity is that God desires that none should perish. When we repent from doing things our own way, submit to God’s leadership and believe that Jesus died and rose again to redeem us, washing away our sin, we can have a close relationship with our Creator, our Heavenly Father. When we die, we cross into an existence that is beyond our imagination, in harmony and in the presence of a loving God.