Speaking the Truth in Love 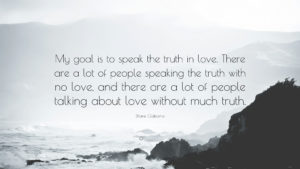 How do we carry ourselves through this marriage debate?

That’s a question that has been popping into my mind many times over the past weeks.

How do we participate? Do we just quietly fill in the voting form with a tick alongside “No” or do we robustly join the campaign?

Are we really homophobic bigoted haters if we declare that marriage should be exclusively for heterosexuals only?

You can see that I’m taking it as a given that as Christians we must vote against any change to the marriage law as it now stands in Australia. For the purpose of this article I don’t want to go into the reasons we should vote a particular way as I want to focus more on the question of what kind of mind-set we should have as Christians in the face of all the accusations of hatred.

In my musings I have been drawn to the scripture that tells us to speak the truth in love.

15 Instead, we will speak the truth in love, growing in every way more and more like Christ, who is the head of his body, the church.

It’s an amazing scripture which tells us not be afraid to speak the truth, no matter how uncomfortable it is but when we do we will speak it because we love the other person. This is the model Christ gave us.

God’s Word is truth. We must be prepared to stand up for what is true, no matter how uncomfortable it may be for the speaker or the hearer. Let us not believe the lie that disagreement is proof of a lack of love.

Jesus is The Truth

During the past week I have twice watched the Movie/documentary, Furious Love by Darren Wilson, WP Films. I highly recommend it to anyone who wants to see God’s amazing love and power in action.

It contains real life footage of people lovingly praying for warlocks, drug addicts, prostitutes, transvestites and witch doctors. Christians loving the kind of people that Jesus hung out with when he walked the earth in the flesh. Jesus got plenty of criticism for from the religious sorts but this is absolutely how we are to love people. Care. Listen. Pray. Tell them the truth that Jesus loves them.

One interview, about 41 minutes in to the movie, stuck with me so much I had to go back to it and write it down word for word so I could share it with you.

Pastor Jan Sjoerd Pasterkamp a Pastor & missionary from the Netherlands with a PhD in Spiritual Warfare says:

“The greatest weapon we have against the devil is love…God redeemed the world through love, not by what we know as spiritual warfare.

I once interviewed a Dutch church historian who said,

“We have dozens of protestant denominations and Christian groups because to the Dutch person, truth is more important than unity”

What is truth? What he meant by truth……is my interpretation of the Bible, my dogmatic view, my doctrinal view. But Jesus said, “I am the truth.” TRUTH IS NOT A TEACHING, TRUTH IS A PERSON, and if you have that person you have the truth and in that person, there is always UNITY. But if we put our doctrinal views higher that the person of Jesus – Now, I’m going to say something very sharp and I want to say it very respectfully and very honourably – we worship idols. Anything we place above the Lord Jesus is an idol. Our unity is not in a teaching, it’s in a person.”

So we must seek the person of Jesus because HE IS THE TRUTH. (John 14:6 Jesus said to him, “I am the way, the truth, and the life. No one comes to the Father except through Me.”)

That’s how we can furiously love people. By knowing Jesus, by becoming more like Him. Far more than knowing a doctrine, however scripturally correct it may be. Without the heart knowledge of Jesus, knowing only scripture puts us together with the likes of those  “having a knowledge of God yet rejecting His real power” (2 Timothy 3: 5). “And from such people turn away”, is the instruction.

When we are with people, even those with opposing views we need to be focusing on their needs, not trying to impress. We have the Light, we have the Truth so we don’t need to prove ourselves. We just have to love.

We (and that includes me) need to not worry about point scoring when we’re in conversation with people. The truth is very few people find Jesus while arguing a point of view. People find Jesus when they experience His love.

That’s what tells us how to manage the current marriage debate. Jesus shows us to love enough to care about every individual. It’s because I care about the individual I will stand for true marriage.

Homosexual Lifestyle – A Cup of Poison

There are enough testimonies from ex-gays and enough medical research out there to show that the homosexual lifestyle contains some very sad consequences.

Patricia King summarised an initial conversation she had with a homosexual who later became good friend with her. It began with:

Why do you Christians hate us?

I don’t hate you. I love you and care about you. Because of that I have to speak out about this because you are hurting yourself. You are stopping yourself from knowing the goodness of God and experiencing all that He has for you. It would be wrong of me not to speak this way

Patricia said that encouraging someone to continue in a homosexual lifestyle is like sitting at the table with someone you care about and watching them drink a cup of poison without saying anything. Or maybe even saying, “Sure if that’s how you feel, if that’s what you want to do I’ll support you in it.”

This is a great example of being bold enough to speak the truth in love. As well as not idolizing doctrine over knowing Jesus, let’s not idolize being in agreement with people over standing for the truth. We must support a no vote because we care about the people, not because we just want to be comfortable with our particular doctrine being the societal norm.

Let us hold upour nation in prayer  and also those who are doing an amazing job at the forefront of the “NO” campaign. They are standing with dignity, honesty and strength.